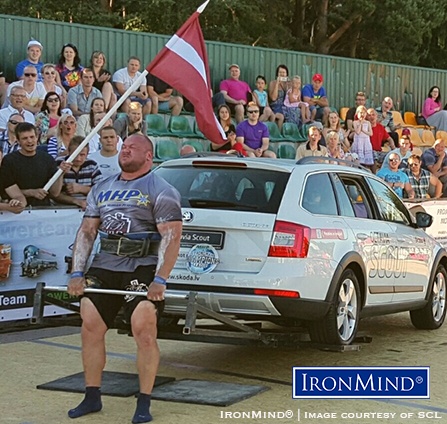 Adding his name to list of men who have claimed a SCL victory was Latvian strongman star Dainis Zageris. IronMind® | Image courtesy of SCL

On a beautiful 25-degree (C) day in a stadium filled with 5000 people, the Latvian hero Dainis Zageris won his first MHP Strongman Champions League ever and you can believe he was very happy about that as he beat Krzysztof Radzikowski, the SCL leader at the moment, as well as the complete field of 12 athletes.
Although Krzysztof set a new world record in Latvia (Viking Press for 12 reps with 170 kg), but it didn’t help him take the overall victory.
Also the other Latvian strongman did really well here, so it shows that the level is going up again in Latvia, where it all began with former strongman Raimunds Bergmanis—who is now a politician in the government in his country.
The show went great and the public support was fantastic. Also, Ervin Katona made his first appearance as a referee in the MHP Strongman Champions League. “It was not easy. It’s a very different thing to be a referee, but all went very well,” Katona said.

We look forward to the airing of this show and many thanks to Andris Bojars and his perfect oerganization. We will be back in Latvia next year.

To watch the world record of Krzsysztof Radzikowski, click here.

And tonight on Eurosport at 00.30 there will be the first broadcast of the SCL Holland 2015, featuring Zydrunas Savickas and Grzegorz Shymanski in a real exciting fight you won’t want to miss.