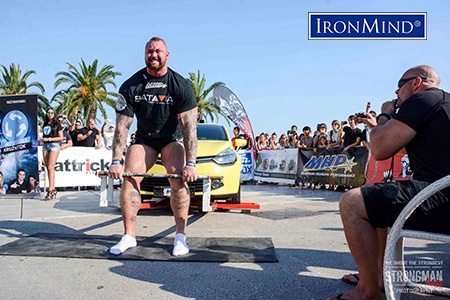 In the beautiful city of Split, Croatia, the two day MHP Strongman Champions League competition is complete with Hafthor Bjornsson emerging as the champion. The competition was a close battle with a new world record in overhead dumbbell and close finishes throughout the day. In a city over 1700 years old, steeped in Roman tradition and history, the athletes arrived for day one for the truck pull after a picturesque boat ride on the Adriatic Sea.

Before a packed crowd that lined the streets of Split, Hafthor completed the course pulling the 14 ton truck 25 m, with an impressive 23.75 seconds. His time was over a second faster than the second place finisher Matjaž Belšak, who finished with 25.34 seconds.

After the event was complete, the athletes travelled back in time to participate in the historical live museum event in the city center. The Diocletian Legion hosted an elaborate ceremony with the goal of preserving Croatian history and culture. Amid Roman soldiers and statesmen, the athletes transformed into imprisoned gladiators while the women became Roman goddesses.

Day two of the competition took place at the harbor in the city center. Five events were scheduled for the day. Despite sweltering temperatures, the athletes were ready to battle. The first event was the car deadlift. Hafthor Bjornsson won yet another event finishing with 10 reps while Dainis Zagaris and Kzysztof Radzikowski finished in second with nine reps.

Event two was the 100 kg (220 lbs) overhead dumbbell. With the sun glaring into the eyes of the competitors and the temperatures over 35 degrees celsius, Krzysztof Radzikowski managed an amazing world record completing nine reps to win the event. Matjaž Belšak finished second with 8 reps.

The third event was the Yoke with approximately 400 kg (880 lbs) for 25 m. With two women on each side, Stojan Todorchev from Bulgaria sprinted the course with an unbelievably fast 11.43 seconds. Radzikowski finished second with 12.60 seconds.

Event four was the frame carry. With 360 kg (792 lbs) for 50 m, once again Stojan Todorchev took off like a bullet finishing the event in 19.14 seconds. Hafthor finished more than two seconds behind with 22.17 seconds. Only three competitors finished the course in its entirety.

The final event for the day was the Conan’s wheel. With 340 kg (748 lbs) pressing down on each athlete, Hafthor won his third event of the competition completing 810 degrees. Radzikowski finished second with 720 degrees.

As the sun began to set, the winner was clear. Hafthor Bjornsson won with 2.5 points ahead of Krzysztof Radzikowski. Despite his win, it wasn’t enough points to take the leader shirt from Radzikowski. The battle continues with eight more competitions on the horizon and SCL Poland taking place next weekend. SCL Croatia was uniquely special with records broken, intense heat survived and an amazing opportunity to take a trip back in time while competing in one of the most beautiful places on earth.