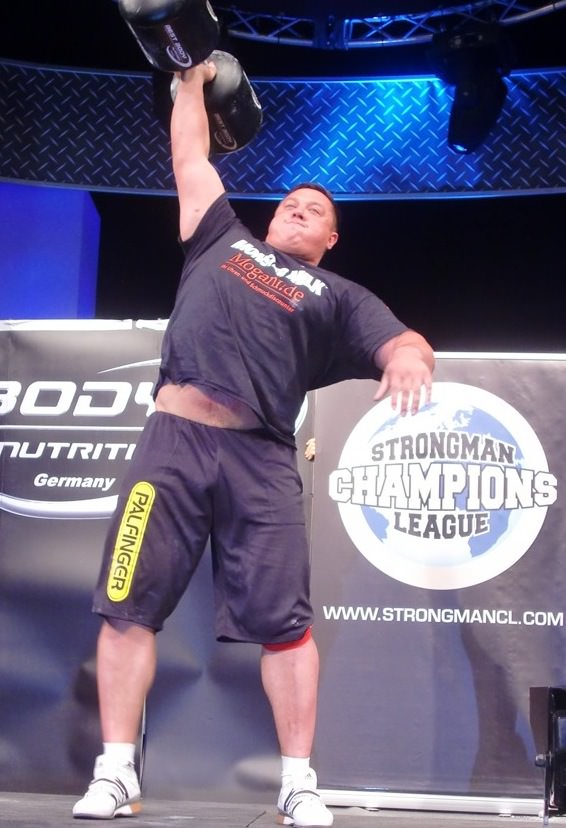 “In a great battle last weekend, Misha Koklyaev beat Terry Hollands by two points in the overall score,” Marcel Mostert reported to IronMind in what he call “a great [strongman] competition at the FIBO.”
With Travis Ortmayer in third place, and following 3.5 points behind him was Ervin Katona, it proves how hard the battle was.
“Ervin Katona started super, with a new personal record on the log lift with 185 kg. He missed his last attempt, 195 kg, the same as Misha, and they both got first [place] on this event. It was clear [immediately] that it wouldn’t be an easy game today.
“Thanks to the FIBO and the efforts of Heinz Ollesch with SCL, this first edition of the FIBO Strongman Champions League was a great success. The crowd loved it, and we had a lot of good publicity. I’m sure that strongman at the FIBO will get bigger and bigger in the coming years.”
Based on his results at this competition, Koklyaev “brought home the 25 SCL points, which they can earn for a first place,” said Mostert.  “But Terry Hollands got his second second place, he s now the leader in SCL points after two stages.”

Here are the top 10 results:

“We already look already forward to be back at the FIBO in 2011,” said Mostert, explaining that SCL had worked four years to “come to the stage that we wanted.  Next year we will do it again, and only [we will] try to do it better!”