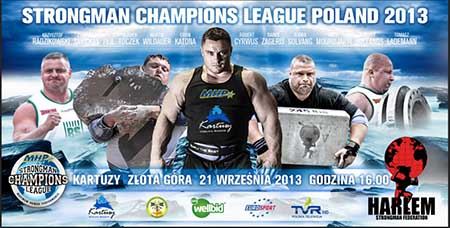 MHP Strongman Champions League will be in Kartuzy, Poland this weekend, so if can be there on Saturday at 16.00 (4:00 pm), you will have a chance to see some of the world’s top strongman competitors live and up close.  IronMind® | Image courtesy of SCL

With 12 competitors starting—including Zydrunas Savickas, Ervin Katona, Terry Hollands, Dainis Zageris and of course Krzysztof Radzikowski—it promises to be a hard fight again in our next edition of SCL.
The complete show will be televised and broadcast on Eurosport, the Polish channel TVR and seen in 89 countries,” Mostert said, as SCL continues to build it worldwide television platform.

“The organisation is done together with the Polish federation, which be seen at www.strongmanharlem.pl.”