Strongman in The Arctic: Zydrunas Savickas Wins The Iceman Stripes 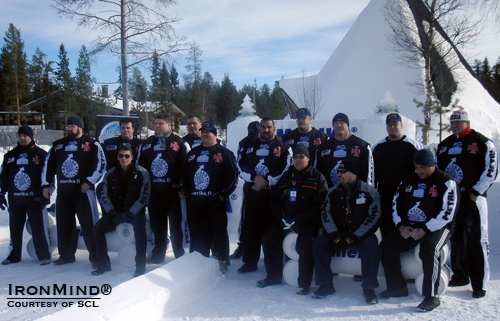 Group photo at the IceMan II, a strongman contest held in a stunning Arctic setting. IronMind® | Courtesy of SCL.

He might have had some rough moments early in the contest, but as predicted, Zydrunas Savickas came back strongly and defended his title in the IceMan—an Arctic strongman challenge.

“The second day in the Iceman started with the Human Ski Lift, an arm over arm pull “where athletes pulled 6 girls on skis 20 meters uphill,” Ilkka Kinnunen reported to IronMind. “Ervin Katona had the fastest time, using excellent technique. His time was 26.18 seconds. Etienne Smitt was second, at 27.43 seconds. and third was Johannes Årsjö at 32.63 seconds. “Next was the Log Lift (140 kg) for reps. Savickas won with 9 reps; Ervin Katona and Konstantyn Ilin both did 7 reps. “In third event of the day, the athletes lifted in Deadlift for reps a 320-kg brown bear. Zydrunas Savickas did only as many as he needed to take first place, 9 reps. Martin Wildauer was second with 8 reps, then Johannes Årsjö, Rauno Heiinla and Ervin Katona equal with 6 reps.“After three morning events athletes had few hours rest before hitting the last two events of the Iceman 2011.

“In Kuusamo city behind a great Hotel Kuusamo is a great amphitheater and it was packed with people. The sky started to get dark and the temperature was under -10 C when first evening event, Truckpull and Loading, started.

“First athletes had to load two 100-kg sacks on the end of the trcuk and then run to the front of the truck and pull it with a harness and rope: 12,500-kg heavy truck total, 20 meters. The athletes wore special mountaineering spikes [crampons] on their boots to get a good grip from the ground. The best time was done by Zydrunas Savickas, 29.84 seconds; second was Johannes Årsjö, 32.43 seconds and third was Ervin Katona, 33.32 seconds.
“The last event was the Loghouse Carry using same system as in Car Walk. Athletes had to carry the 360-kg Loghouse Frame a distance of 23 meters. The fastest man was Big Z at 11.90 seconds, second ws Johannes Årsjö at 12.52 seconds and third was Etienne Smitt at 12.91 seconds.”

Here are the top eight final places and scores, officially:

Wasting no time in looking to next year, “IceMan 2012 is already signed and preparations will start next month,” Kinnunen told IronMind.