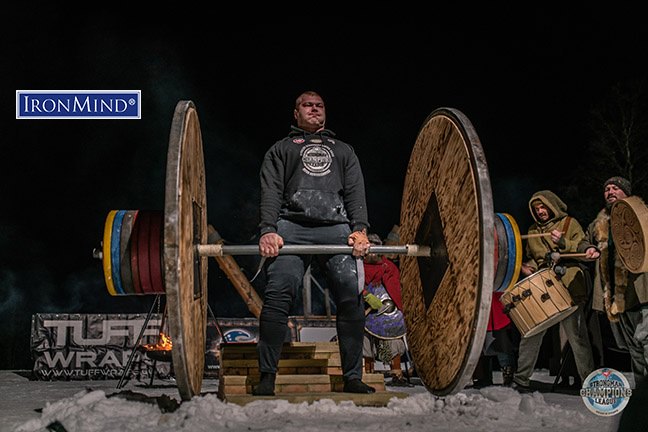 With the title up for grabs, Sean O’Hagan got the top honors at SCL’s World’s Strongest Viking in Fefor, Norway—where two world records were broken.

The spectacular Fefor Arena hosted the seventh World’s Strongest Viking, part of the SCL World Series.  With the absence of former title holders such as Hafthor Bjornsson, J-F Caron and Krzysztof Radzikowski, the door was open for a new star to move to the top of the podium.
The first event was held on Friday evening and was from the beginning the most exciting event of the whole weekend: a deadlift based on the Pure Strength event held at Huntly Castle, pitting strongman legends Jon Pall Sigmarsson, Bill Kazmaier and Geoff Capes against each other.

For anyone who needs an introduction, in the 1980s three man were dominant in the world of strongman: Bill Kazmaier (USA) World Strongest Man (WSM) winner in ‘80, ‘81 and ‘82, Geoff Capes ( U.K) , WSM winner in ’83 and ’85 and Jon Pall Sigmarsson (Iceland), WSM winner in ’84 , ’86 , ’88 and ’90. The event wasn’t held in ’87 and under the auspices of Dutchman Tjalling van den Bosch the event Pure Strength was born: the setup of the program brought the three giants together at Huntly Castle in Aberdeenshire (Scotland) for a championship over 10 events, the legendary Viking Jon Pall Sigmarsson won 8 out of 10 . . .

The organization of the World’s Strongest Viking 2020  had made a copy of the axle, but with massive Viking shields and a Apollon axle bar and asked themselves the question: Is it possible to break the 33 year old record of the gentleman giant from Iceland. The event was named the “Jon Pall Viking deadlift,” to honor Jon Pall Sigmarsson.

The starting weight of this first event was 360 kg and for the thirteen competitors this was really a piece of cake, so where would this end?  Everybody had also no problem with the 420 kg, but the 460 kg was too much for the unlucky Ole Martin Kristiansen (Norway), Johan Espenkrona (Sweden) ended on 440 kg; Zake Muluzi (Scotland)), Mika Torro (Finland), Stefan Solvi Petursson (Iceland) and Stefan Sekaj (Norway) finished on 460 kg.

After the 500 kg., well done by the other six athletes, the weight of the bar was brought to 525 kg, just above Jon Pall’s record, no less than five men were successful: Sean O’Hagan (Ireland), Ervin Toots (Estonia), Aivars Smaukstelis (Latvia), Odd-Inge Kvernberg (Norway) and Jonathan Cotton (USA). For the strong Jorn Erik Bolstad from Norway the record was just too much, Holland’s Kelvin de Ruiter passed, and together with Kvernberg and Cotton he was successful on the 540 kg.

After the 580 kg, three men were still in the race: 2019 SCL World Champion Aivars Smaukstelis, the great talent Ervin Toots and the strong American Jonathan Cotton.

The 600 kg bar was lifted by all three, but Ervin Toots from Estonia  lifted the huge weight as first so the world record is on his name, the 620 kg. was too much for all three, but what a great new event this is!

Event four, the massive Viking Press of 155 kg (world record holders Krzystof Radzikowski and Luke Herrick with 15 presses), became a victory for Ole Martin Kristiansen (12 presses) who had a very good second day after his bad performance on the deadlift, Johan Espenkrona stayed on track with 10 and also Smaukstelis and Cotton showed recovery with 9 presses, Kelvin de Ruiter made a big mistake by putting the weight down after one press: After the mistake he could forget the stage of honour.

Before the last event, the Viking Boat Pull, Sean O’Hagan was leading with 39.5 pt. with Aivars Smaukstelis in second place with 34.5 and Stefan Solvi Petursson (33.5) , Ole Martin Kristiansen (33) and Mika Torro (31) in pursuit.

The boat pull is not a very heavy event but a very good and solid start is necessary. Mika Torro took the 13 points in a magisterial time of 19.16 seconds followed by Aivars Smaukstelis in 19.78, Ole Martin Kristiansen in 20.72, Stefan Solvi Petursson in 20.78 and Sean O’Hagan in 21.50.
The results determined the ranking after five events and the title went to Sean O’Hagan, his first title in the MLO Strongman Champions League ever.

Next stage: SCL Germany (FIBO), stage 2, 04 April, Cologne/Germany. Be there live with us!