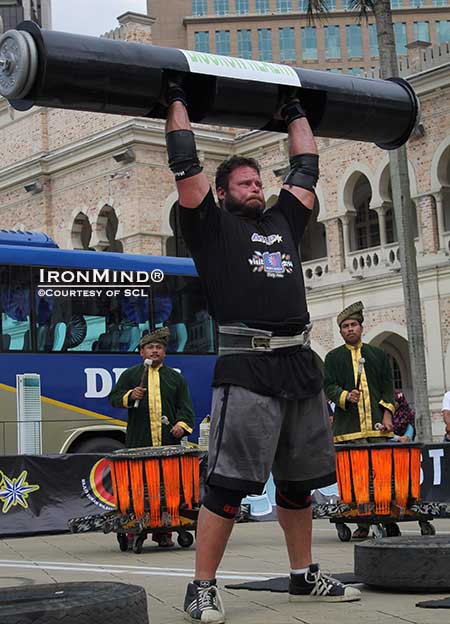 Mike Burke, shown on the Log Lift at the 2013 SCL Grand Finale in Kuala Lumpur, is headed to Shanghai.  IronMind® | Photo courtesy of SCL

There will not be much resting for Ilkka Kinnunen and Marcel Mostert after a long 2013 season, because the cofounders of Strongman Champions League are headed back to China in the first week of the New Year.

“In 2014, in the first week of January, the next event is ready to rock: Guinness World records in Shanghai,” Marcel Mostert told IronMind today.

“And on top of that, we will have a strongman demonstration on a famous Chinese TV show. Athletes still have to be finalized, but Hafthor Julius Bjornsson (Iceland) and Mike Burke (USA) will be present for sure. They will do new attempts on Guinness records and will be stars on the other show, too.

“This will be filmed and broadcast during at the Chinese New Year holidays, in one of the best time slots on CCTV 1, which is a great honor for the MHP Strongman Champions League directors and athletes.

“But before that, we all can enjoy the MHP SCL semi-finals in Brazil first, tomorrow, on Eurosport at 23.00 hours,” said Mostert.