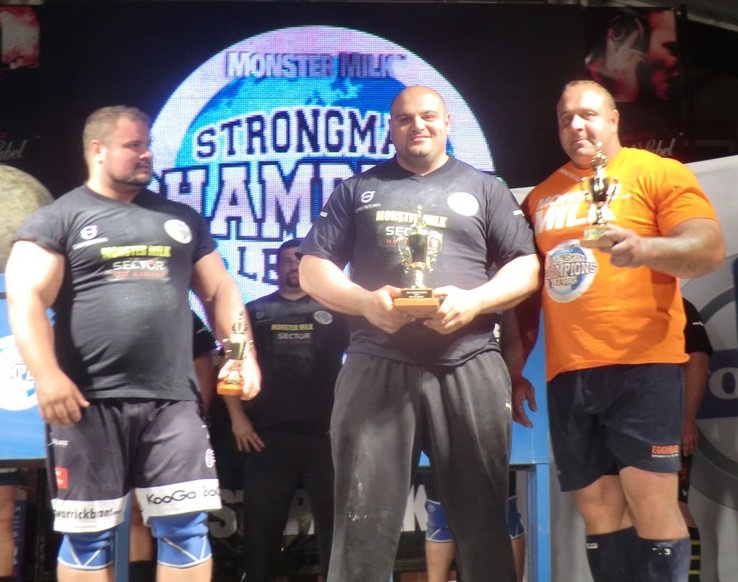 Strongman Laurence Shahlaei has been short of talk and big on the walk, and now it’s no secret: this guy’s a comer at the highest levels, and to underscore the point that Loz is in town, he celebrated his Strongman Champions League (SCL) debut with a victory party.
Left to right: Laurence Shahlaei (center) won SCL–South Africa, with Etienne Smit (right) coming in second and Warrick Brant (left) coming in third.

Laurence Shahlaei wins SCL–South Africa, by Marcel Mostert.
It was his first time in the Strongman Champions League and he hit right here! Laurence Shahlaei, originally from Iranian parents, gave his business card right away… and how! He won the truck pull, made no less than 8 reps in the 345 deadlift kg and a new personal record in the log for ma. with 185 kg. This gave him three times full score, and a solid base for the first place overall. A great entrance for him in the SCL. Etienne Smith grabbed the second place overall in his home country which made him very happy, and Warrick Brant knew just half a point to stay ahead of Christian Savoy, good for third place. Johannes Arsjo got hit with a small injury in his lower back, as he pushed himself just a bit to much at the deadlift for reps. It was a pity for him, as he might had the possibility to take the lead in the SCL overall ranking.
This was already the fourth stage of the SCL, now in the wild country of lions and elephants. Complete with athletes from all continents. The big five were in Africa! But the SCL train runs fast to its next stop, coming weekend already will be the fifth stage, the SCL Finland. Also Laurence will compete again there. Will he strike again?