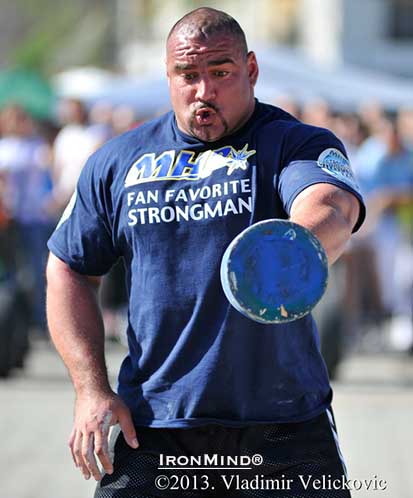 Marcel Mostert has just sent IronMind a report on the MHP Strongman Champions League contest in Serbia, where Ervin Katona held off Martin “The Deadlift Kid” Wildauer for the title.

This was the third stage of the MHP Strongman Champions League 2013 season and “The Austrian ‘Deadlift Kid’ was in a super shape and finished on second place, just 2 points behind Ervin,” Mostert said.  “He won the weight for height with 25 kg in a personal record over 5.60 meter.  He also did an attempt  for a new world record at 5.80 meters, but just missed it by a few centimeters.

The new Latvian champion, Dainis Zageris, got a second place on the weight for height with 5.40 meter and a third place overall.  A personal record for him as well.  Tomi Lotta was wearing the MHP/SCL leader shirt as the highest ranked athlete and Ervin Katona won the MHP Fan Favorite Strongman shirt.

“Jan Wagenaar from Holland did well with a sixth place, his best in an SCL contest so far.  Johannes Arsjo got a little injury during the 360-kg frame walk and was very disappointed.  Still, A beautiful sunny day with great crowd in a fantastic atmosphere made the competition a very succesful and exciting day,” said Mostert.

The next stage of the MHP Strongman Champions League will be this coming weekend in Latvia, on May 25.

The next stage of the MHP Strongman Champions League will be this coming weekend in Latvia, on May 25.