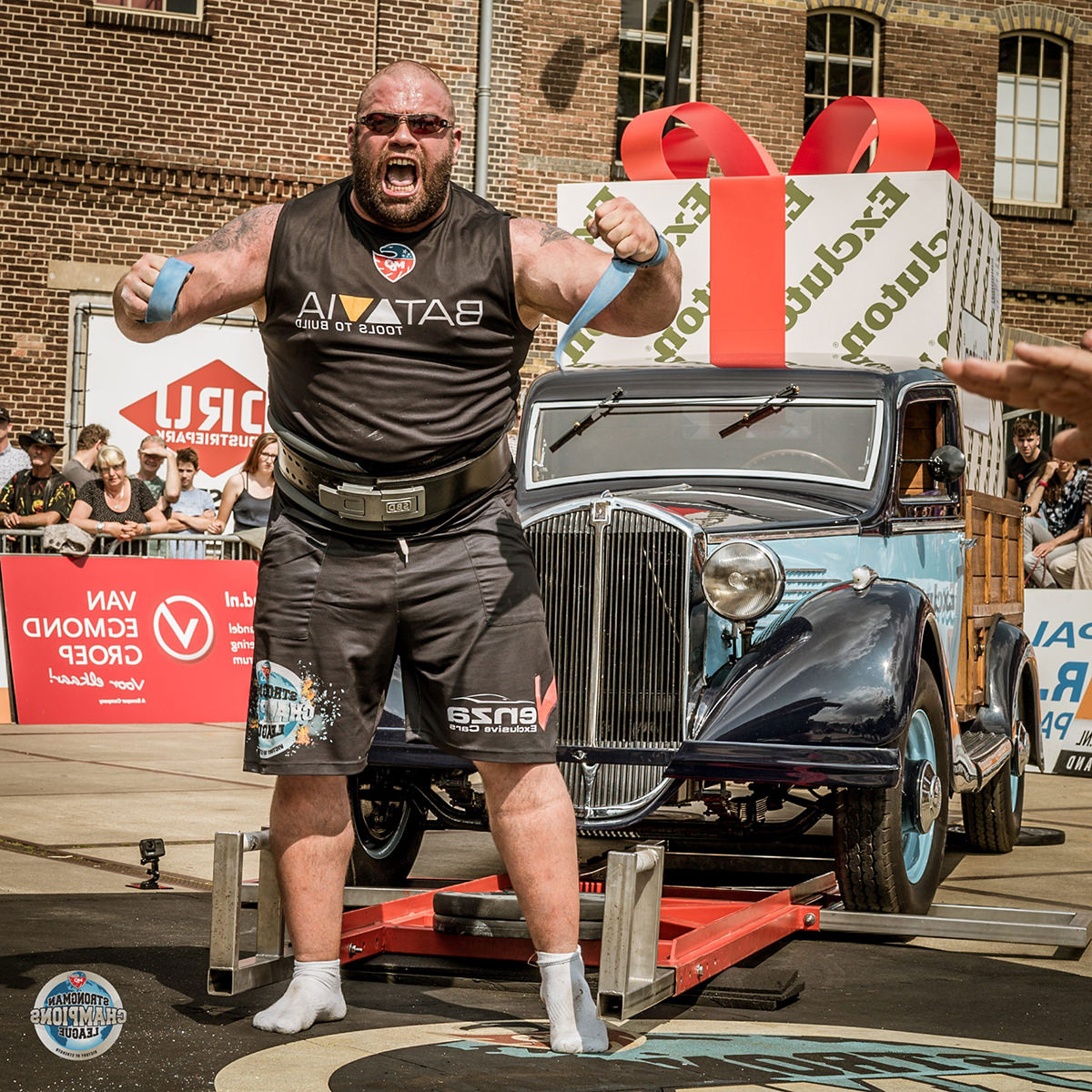 For the first time in the history of the Strongman Champions League, founded in 2008, and every year since then also held in the Netherlands, the organization could celebrate a Dutch winner.
Four times Strongest Man of Holland, Alex Moonen took the gold before the “Flying Dutchman” Kelvin de Ruiter, “El Toro” from Finland Mika Torro completed the stage after 6 events.

The first event, a truckpull of 17.000 kg over 25 meters in max 75 seconds, was a real hard first event, light-weight and Morocco’s favorite Fouad Hsaini started and made 12.83 meters, the very strong Johan Espenkrona from Sweden finished at 22.45 meters and Holland’s debutant Vlad Buda almost finished but stopped at 24.80 meters. Four times Holland’s strongest Alex Moonen was the first man with a full-pull in 67.81 seconds, only 3 other athletes had a time-finish: top-favorite and SCL’s leader Krzystof Radzikowski in 53.12 seconds, Ireland’s gently Giant Sean O’Hagan in 56.09 and… the World Champion Truckpull , Holland’s runner-up Kelvin de Ruiter, in a magnificent and rare style he finished in 36.06, awesome, awesome, awesome.

The second event, a wheelflip of 400 kg with 8 flips, was the end for SCL’s leader Krzystof Radzikowski, a torned biceps in his race meant the end for the leader, a loss for the man himself and for the organization. Also Dainis Zageris was back for the first time after an operation but could not make the difference in his first event after eight months.
The very strong Kelvin de Ruiter took again the gold in this event in 24.39 seconds for Mika Torro in 29.50, Alex Moonen in 31.85 and Vlad Buda in 32.35, Ryan England (34.64) and Johan Espenkrona (44.05) followed.

The third event, a car-deadlift of 340 kg. on reps in 60 seconds, gave another great winner, the 23 years young but very strong athlete from Poland, Konrad Karwat, showed the audience a perfect 16 reps but immediately followed by three man, Ryan England, Alex Moonen and Kelvin de Ruiter, each with 13 reps for Dainis Zageris (12), Johan Espenkrona (11) and Vlad Buda (11).

Event four, a Viking-press of 150 kg.,should normally be a prey for the man with the nickname Shoulders, Lucain Herrick from the U.S.A. , he came, he saw and made 15 reps and thought it should be good for the 14 points but Ryan England had different thoughts and made also 15 reps, the both shoulder-men were followed by Moonen and Karwat (10) and Espenkrona (9). For Kelvin de Ruiter (6) and Mika Torro(3) this event was a defeat.

The last event, the Stones of Strenght 130, 140, 150, 160, 170 and 180 on equal height but on distance from the barrels in max 90 seconds, was a immense finish for this episode under good circumstances and an excellent organization under leadership of Paul Rabelink of Sport- en Gezondheidscentrum Physique.

Only three athletes were successful over the six stones, the first complete serie was for the strong and friendly Viking from Sweden Johan Espenkrona in 77.58 seconds but Kelvin de Ruiter took the lead in 54.50 seconds . Leader of the day Alex Moonen didn’t want to capitulate and for the first time in many years he won the event in 44.25 seconds, awesome, awesome, awesome.

After some calculation the prize-giving ceremony started and showed that Alex Moonen was the first Dutch athlete under the flag of SCL who’s allowed to put the event on his honors list with 67.5 pts for Kelvin de Ruiter – Holland (63 p.) and Mika Torro – Finland)who completed the podium of honor with 57 points.

Breaking news: Krzystof Radzikowski had a successful operation on Monday in Poland. (picture)