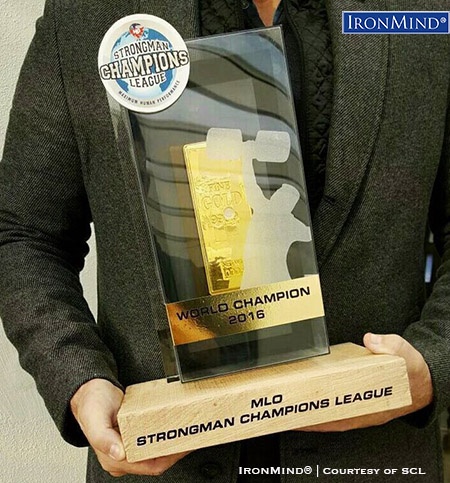 The 2016 MLO Strongman Champions League finals will be held in Dubai November 4-5, to determine the SCL world champion, who will win this trophy and 1 kg of gold, among other awards. IronMind® | Courtesy of SCL

“Finally, The real raw clash for the world title will be this coming weekend 4 and 5 November in Dubai,” Marcel Mostert reported to IronMind.

During the year, more than 100 athletes competed in 15 stages all over the world to gather ranking points in the biggest strongman league of the world, the MLO Strongman Champions League. The 10 best in the ranking, with only 1 per country allowed, will start in the world finals: the SCL leader will start with 10 points in the finals, the number 2 with 9 points, etc.

There is still a chance for these finalists to be the new world champion 2016 and win a bonus of 1 kg gold.

These are the finalists and their starting points:

Here is the schedule for the finals: