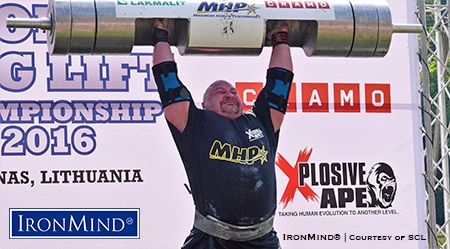 Vidas Blekaitis and newcomer Robert Kearney from the USA won the MHP/SCL Log Lift World’s 2016.
In a very nice sunny day in Kaunas, with a great stadium and a fantastic cheering audience, it was these two men who caused a sensation: With both hitting 202.5 kg, they shared first place after 4 attempts. Vytautas Lalas (Lituania) could have ruined their party with an almost good lift on 205 kg. He was very close.

Marcos Ferrari from Brazil made a new national Brazilian record with 182.5 kg. Patrick Baboumian ripped his right tricep after he tried 180 kg.
Zydrunas Savickas injured himself just before, with a muscle in his neck. He expects it will be recovered soon. Therefore he could not compete, which was of course a pity for the world record holder, but for the contest of course it was very excited to see who would be number 1 in this crazy log lift battle and the 3rd stage of the MHP Strongman Champions League was again a hard one. 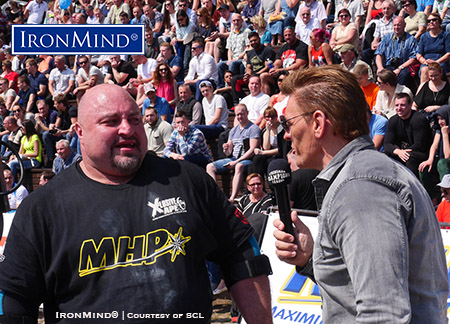 The next stage will be 11 June in Holland, with stars as Vytautas Lalas, J-F Caron and Gregorsz Szymanski and Dainis Zageris at the start. 15 athletes will be there in a total over 6 events. It promises to be a great battle again, so stay tuned!