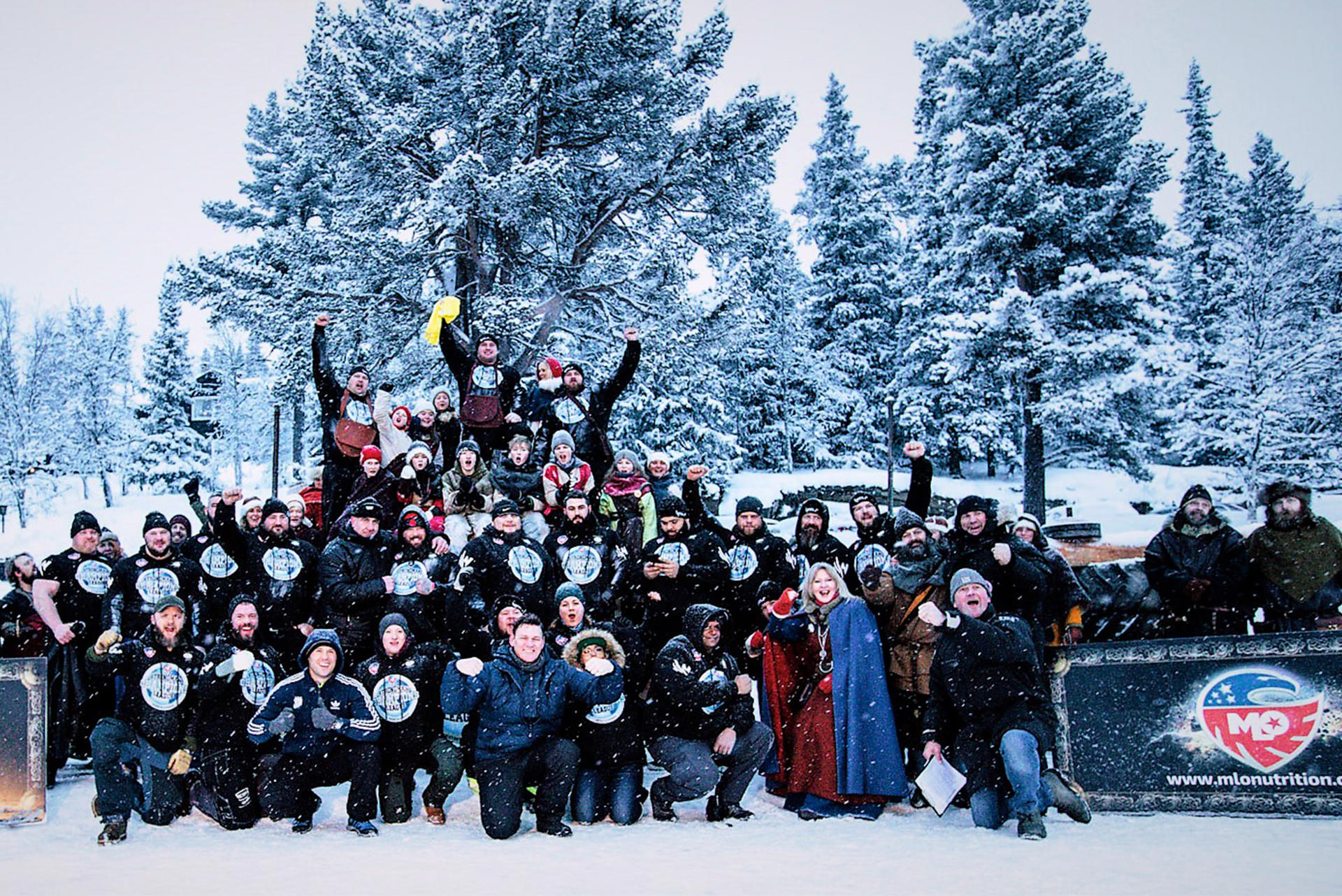 If you do the same over and over again, you either become very good at what you do, or you become bored, boring and then you die.
The SCL World Strongest Viking promotor, crew, venue, staff and SCL management has put on competitions in sub-zero temperatures and snow for years now, and it has become good. Very good!

The SCL season has the last four years started at Fefor Arena, placed at Fefor Highland Hotel in the midst of Norway. This historical hotel has hosted a number of strongman competitions during the last six years and has during the years built a name in the strongman community throughout the world.  The events are so raw and cool that athletes almost beg to be invited to do this competition.
As always SCL Norway – World’s Strongest Viking have a beautiful backdrop of a Viking village, Viking fighters, handcrafters and musicians, and this year even Njord – the God of weather – was on the athlete’s side.

This year 14 athletes from all over the world came to Fefor to compete in 6 cruel events.

First event started Friday night, and this year it was the majestic Hercules Hold that were the opening event. This big wooden structure is a hard challenge for all trying it, and for our athletes it was 150 kg each hand.
The Norwegian newcomer, Stefan Sekej, were out as number one. He stood in the very cold winter night for 54.47 seconds and set the bar for the rest of the athletes. All athletes wanted to beat the old stand world record from this , what was in hands firstly from Hafthor Bjornsson and later from JF Caron with a 60 seconds.

The Irish giant, Sean O’Hagan ended up setting a new World Record with an impressive 63.40 sec.

After this great event in full snow and wind in a cold evening , the athletes got a good meal and a good night’s rest before day 2 started. The weather was good, and the wind wasn’t too bad, so the -21 Celsius didn’t feel too bad.

First event in day 2 was the Viking Press for reps. The implement weighed 155 kg in hands, and Krzysztof Radzikowski had the standing worldrecord on 15 reps in 60 seconds from 2018.

Lucain Herrick from USA had his head set on beating that record, but ended up with a tie on 15 reps, and a shared World Record with Krzysztof. Ryan England and Krzysztof Radzikowski came second with 13 reps each on this day.

Third event was the iconic Viking Boat Pull. This beautiful Viking Ship had to be pulled 20 meters, without hand rope. The ship itself isn’t too heavy but pulling it on snow is hard, so this is a challenge for all athletes. The winner of the event was Mika Törrö from Finland, who pulled the ship in 16,12 seconds.

Fourth event was powerstairs. 3 implements weighing 180, 190 and 200 kg was to be lifted as fast as possible up 4 stairs. Lucain Herrick had injured his arm, so his plan was just to do one stair, just to get points in the event. He did 4 stairs and placed last with one point. Fastest of all was Norway’s Strongest Man, Ole Martin Kristiansen. He did all 12 steps in 21.69 seconds. Dainis Zageris from Latvia came second, and Krzysztof Radzikowski came third.
After this event there were a cut, where top 10 went on to the finals.

The fifth event was done for the first time at Arena Fefor. An 8,3-meter-long, 150 kg heavy Fingal Finger where to be flipped as many times as possible in 60 seconds. This implement – like all the other implements at Arena Fefor are made specifically for the arena, and like all the other implements this one is also made out of wood from the local forest. And it worked well.
Most athletes managed to get at least one flip on this massive finger, and best of all – and also the one who took the new World Record, where Sean O’Hagan from Ireland. He did three flips in 63.04 seconds.

This is a stone that will try to suck life out of you while you walk with it, it will try to steal your breath, crush your lungs … it is a reason why husafell carries are an event most athletes dread. It is also an event that doesn’t favorize the bigger athletes, so our guys did have the odds against them.

Each lap were about 15 meters long, and four athletes didn’t manage to go all those 15 meters before the Fefor-Stone sucked life out of them. Three athletes ended up on 15 meters, and one at 22. The shared World Record was taken by Ole Martin Kristiansen from Norway and Latvia’s own Dainis Zageris, both walked impressive 30 meters before they fell , on the ice/slippery snow wet floor!

And with this, with 3 World Records set , the edition World’s Strongest Viking 2019 was over, and Krzysztof Radzikowski, the champ from last year, once again took the title, this year’s

Another awesome competition at Arena Fefor was over, and all we can do now is to welcome you all to come and be a part of it in 2020.

The competition will be even better than the years before, the athletes will be stronger and the events will be harder.
We look forward to see you there again of course.