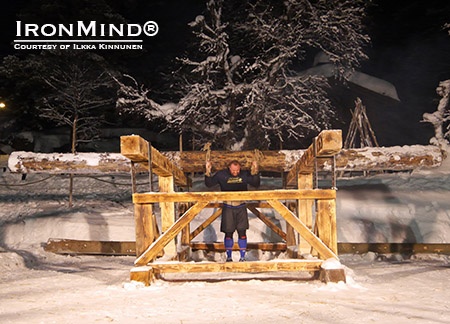 “Hafthor Julius Bjornsson made history today in the World’s Strongest Viking competition,” Ilkka Kinnnen reported to IronMind, “breaking a record that has been part of history for 1000 years.”

“The record has been described in Icelandic Saga book,” said Kinnunen. “The legend of the Icelander Orm Storulfsson says that he walked three steps with this MONSTER WOODEN LOG which weighed over 650kg and was 10 m long! It took 50 mere mortals to help him placing it on his back! After he took his third step, his back broke under the enormous pressure and he was never the same after that!

“Well, today my friends, I made history!,” said Bjornsson. “As well as winning the title of The World’s Strongest Viking for the second time in a row, I carried this MONSTER LOG 5 steps! My back held up fine!

“I’m on my way to my ultimate goal, to win The World’s Strongest Man! NOTHING CAN STOP ME!! NOTHING CAN BREAK ME!!,” said Bjornsson.